The name Zed comes from the Commonweath letter for Z.[1] The inspiration for Zed was taken from the Major Arcana Tarot Cards in which the main character Zed represents Number 0 card: The Fool.

Due to the safety concerns arising from the 2011 Tōhoku earthquake and tsunami, Cirque du Soleil ordered an inflatable airbag from Canvasland located in Levin, New Zealand. The nylon cushion measured 12 by 5 meters (39 ft × 16 ft) and weighed 200 kilograms (440 lb) costing $15,000. The design included an air mattress base and inflated tongs; this allowed the artist to fall safely in any position without bouncing off. The airbag was used in the high wire act, ensuring additional safety in the event of any new earthquakes and aftershocks.[2]

As a result of the Tōhoku earthquake and tsunami, Zed's shows from March 11 through April 20, 2011, were canceled. The artists and staff of Zed were temporarily relocated to Macau where they continued training at Cirque du Soleil's resident show Zaia.

On Sunday, July 24, 2011, it was announced that Zed would be permanently closing on December 31, 2011. The closure was due to the business environment that arose from the impacts of the 2011 Tōhoku earthquake and tsunami. Zed had reached its one-millionth guest faster than any show in Japan, and had seen great success with over 1,000 performances.[3]

The story of Zed is about a man dressed in white named Zed, a lone traveler who goes on a journey to unite both the Sky and Earth. As he sets out on the voyage to bring both worlds together, he meets with the world's rulers, Nouit and Abraka. By the end of the show, Zed represents consciousness, restored harmony and the reversal of the order of things through laughter. 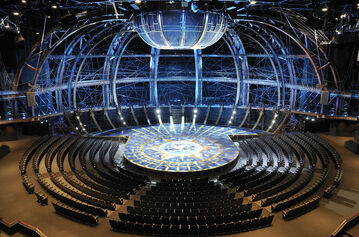 Cirque du Soleil spent three years constructing the Cirque du Soleil Theater Tokyo for its resident show Zed.[4] The theater, which is located at the Tokyo Disney Resort, was exclusively designed for Zed. The roof was formed by polyhedrons and was made to look similar to the circus tents seen at Cirque du Soleil's Grand Chapiteau touring shows. The form was designed to capture the sun's light from any angle.[6]

François Séguin, set designer, drew inspiration for the set design from the astrolabe. The atmosphere of the stage was intended to evoke the High Renaissance and the beginning of the Mechanical Age. Finishings of the stage included many brass and copper components representing mechanical gears. Above the stage, a globe showed the meridians and lines of latitude, while the Milky Way and phases of the moon appeared on the stage floor. Also seen throughout the stage and show was the "Zed Alpha"—a 26-letter alphabet created for the show.[4]

Central to Zed's theme was the uniting of the people from the earth and sky. To set them apart, costume designer Renée April chose iridescent colors, pale shades, and heavy usage of pearl and silver for the people of the sky, and chose an Italian Renaissance color palette (gold, ochre, Venetian blue, turquoise green) for the people of the earth. Zed, who united this group, was clad in darted, all-white organza, and his outfit was reminiscent of a Pierrot. Djinn, who was part of the earth group, wore an outfit made of a synthetic silicone material. The neckline had a type of gold leaf appliqué to resemble an Inca or Aztec necklace. The torso, upper body, and arms had tattoo designs printed on the silicone material.

Additional highlights of the costumes included the following.

As the inspiration of Zed was the Tarot and its Arcana, many of the characters were based on this tradition.

The music for Zed was composed by René Dupéré with additional compositions by E.L. Allaire and M.L. Ferguson. A soundtrack for Zed was produced by Martin Lord Ferguson and Ella Louise Allaire. Zed's soundtrack was released on October 13, 2009.

For more information on the songs featured in Zed, please visit Zed (Soundtrack). 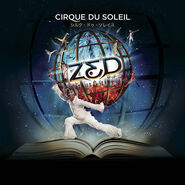 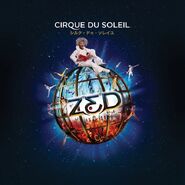 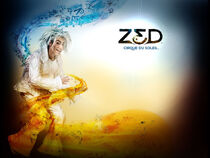