Edit
watch 01:54
Obi-Wan Finale - The Loop
Do you like this video?
Play Sound

Zaia was a resident Cirque du Soliel production created and directed by Gilles Maheu. Zaia was Cirque du Soleil's first resident show in Asia.[1] Zaia is about a young girl who dreams of becoming an astronaut and going into space.[2] Zaia premiered on August 28, 2008, and closed on February 19, 2012.

The Zaia Theater and set were designed by Guillaume Lord and built by Aedas Ltd. HKS and Auerbach Pollack Friedlander Consultants. Acoustics for the Zaia Theater were built by Shen Milsom & Wilke. The size of the theater is 33,000 sq ft. and can seat up to 1,800 audience members.[6]

The theater contains a proscenium arch cut with "gill-shaped" walls. The ceiling contains a complex oval track with multiple overhead tracking acrobatic trolleys and a large 7.5 meters mechanized video sphere that runs on three different axes and contains 6 different projectors inside the sphere. [6] The stage contains a large circular stage lift in the middle of the stage and two turntables on each side of the stage. The backdrop of the stage measures 36-by-21 meters.

The sound system for Zaia contains 18 sub-bassed sources, 55 surround speakers, point-source speakers on the grid, 9 speakers located in the backdrop.[7]

Costume designer Dominique Lemieux took inspiration from self-made clothing from younger generations when designing the costumes for Zaia. Some of the costumes are made from recycled toys and objects.[7] For the clown outfits, Lemieux drew inspiration from 18th century explorers and used patches of fabric with patina.[8]

For more information on the songs featured in Zaia, please visit Zaia (Soundtrack). 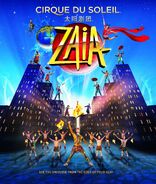