In 2013, MSC Cruises and Cirque du Soleil created a partnership to develop 8 unique shows for 4 MSC cruise liners. The first two shows, Viaggio and Sonor, premiered on June 4, 2017, onboard the MSC Meraviglia. On December 5, 2018, Cirque du Soleil and MSC Cruises announce the second pair of shows Syma and Varélia will premiere on March 2, 2019, onboard the MSC Bellisima.[1]

Yasmine Khalil, chief executive officer of Cirque du Soleil and president of Cirque du Soleil: Events + Experiences, stated, "We are thrilled to embark on our second MSC Cruises ship as we pursue Cirque du Soleil’s journey at sea...Joining Viaggio and Sonor, our first two shows on MSC Meraviglia, Cirque du Soleil continues to reinvent itself through an intimate theatre experience where two new shows are created exclusively for MSC Bellissima".[1]

Like the Viaggio and Sonor's stage on the MSC Meraviglia, the Carousel Lounge for Syma and Varélia is an intimate 360-degree stage were designed by Marco De Jorio. The lounge seats 413 guests and contains a long interactive LED screen that crossing the entire lounge.[2]

The LED stage is contains a rotating disk and the LED Screen has a section that can convert to a staircase. Also above the center ring is a carousel aerial tramway used for rigging props and performers above the stage. The development cost for The Carousel Lounge is €20 million ( $22,045,840 USD ).[2]

The costumes for Syma were created by Nicholas Vaudelet. Bones, fossils, X-rays of marine fauna and fish scales have been used to create the textile patterns of the costumes. Knots braiding, straws, and raffia were used to create a more organic feel to the costumes rather than using methods to recreate them.[2]

The makeup design was done by Maryse Gosselin who previously worked on Cirque du Soleil At Sea shows Viaggio and Sonor. To show that Syma has been journeying, she was given prominent freckles. Her lips have a strong gradient to them due to her love of lollipops.[2]

The Underwater Creatures use UV makeup to reflect stage lights during their bungee act. [2]

Due to Syma being on a cruise ship, the acts in the performance are rotated out or scaled back due to either the weather, the season, or the current sea state.[3]

The music for Syma was composed by Félix-Antoine Couturier. The score is cinematic, lyrical, and adventurous.[2] 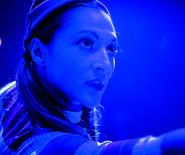 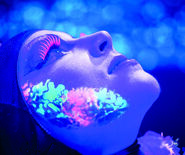 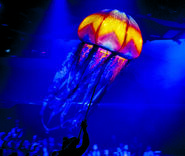 Cirque du Soleil at Sea on board MSC Bellissima

Community content is available under CC-BY-SA unless otherwise noted.
Advertisement