In 2013, MSC Cruises and Cirque du Soleil created a partnership to develop 8 unique shows for 4 MSC cruise liners. MSC Cruise's executive chairman Pierfrancesco Vago made the decision to partner with Cirque du Soleil wanting to improve the entertainment portion of MSC cruise ships.[1] The first two shows for MSC Cruises Viaggio and Sonor were developed in 2017 and released simultaneously on June 4, 2017. The second and third pairs of cruise shows premiered 2019 and the fourth pair of cruise shows premieres in 2020. Each show performs in front of a 400-guest audience six nights per week.[1]

Costume designer Liz Vandal wanted to create "real-life clothing" mixed with a "tribal-futuristic avant-garde" feel to the costumes of Sonor.[2] The color palette for the costumes is grey, white, and black. This was chosen so when the costumes appear in the light, they become the focus of the show.[2]

When the Cyr Wheel costume is reflected with UV light, the costume shows snake-like patterns.[2]

Due to Sonor being out at sea, the acts in the performance are rotated out or scaled back due to either the weather, the season, or the current sea state.[3]

The music for Sonor was composed by Maxim Lepage. Since sound is at the main theme of Sonor, Lepage focused on creating a multi-layered electronic soundscape. Along with a combination of synths and beats, Lepage incorporated ambiance and human sound effects. These sounds are human panting, breathing, shouts, singing and clapping to add an organic feel to the electronic soundtrack. Lepage also used sine waves throughout the music to compliment the Sonor character.[2] 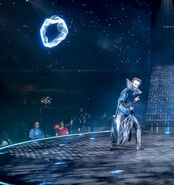 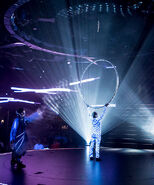 The secrets of Cirque du Soleil at Sea

Community content is available under CC-BY-SA unless otherwise noted.
Advertisement