Quidam (/kiːˈdɑːm/ kee-DAHM) was the ninth stage show produced by Cirque du Soleil. It premiered in April 1996 and has been watched by millions of spectators around the world.[1] Quidam originated as a big-top show in Montreal and was converted into an arena format beginning with its 2010 tour in North America.[2] It then changed back to the Big Top for a 3-month run in Seoul, South Korea before returning to an arena show for its tour to Oceania. The show performed for the final time in Christchurch, New Zealand on February 26, 2016.

The entire show is imagined by a bored girl named Zoé who is alienated and ignored by her parents. She dreams up the whimsical world of Quidam as a means of escaping the monotony of her life.[1]

The show's title refers to the feature character, a man without a head, carrying an umbrella and a bowler hat. Quidam is said to be the embodiment of both everyone and no one at the same time. According to Cirque du Soleil literature "Quidam: a nameless passer-by, a solitary figure lingering on a street corner, a person rushing past... One who cries out, sings and dreams within us all."

The minimalistic stage was designed by Michel Crête to represent a monolithic structure such as an airport or train station where people are always coming and going. The major set element includes the five, all-aluminum, 120-foot (36.57-meter) arches above the stage, known as the téléphérique. These allow performers to be transported onto and off the stage from above. Each rail of the téléphérique has two trolleys: one to raise and lower the performer or equipment, and the second to transport it onto or off the stage.

The stage floor is made of aluminum decks with a perforated, rubber-type mat. The perforations, of which there are over 200,000, allow light to pass through from below the stage, creating visual effects.[1]

The cast of Quidam has a cast of 45 acrobats, musicians, singers, and characters, some of which are detailed below.[1][3][4] 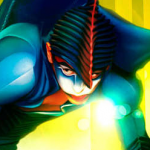