Paramour was created by Philippe Decouflé, who was also director of the cinema-themed production Iris. After Iris had its final performance on January 13, 2013, scenes from Iris were incorporated into the production of Paramour.[2]

Set in the "Golden Age of Hollywood", Paramour follows the story of A.J. Golden, Indigo, and Joey Green.[7]

After firing his lead star Lila for being too distracted during filming, Hollywood director A.J. Golden is looking for a replacement for the lead role for his new film Paramour. With the advice from his personal assistant Gina, A.J. discovers a small-town girl named Indigo in a local speakeasy and makes her a big Hollywood name.[7]

The stage for Paramour was designed by set designer Jean Rabasse. The stage and the set were inspired by art deco, a popular art style in the 1920s.

The costumes of Paramour were created and designed by costume designer Philippe Guillotel with the wigs worn by the performers were created by Josh Marquette.

For the makeup of Paramour, makeup designer Nathalie Gagné wanted a more natural "Broadway look" for the characters and performers.[8]

The music for Paramour was composed by Guy Dubuc and Marc Lessard (Bob & Bill) with lyracist Andreas Carlsson. The soundtrack is a mixture of jazz, swing, big band, show tune, bluegrass, and traditional pop.

For more information on the songs featured in Paramour, please visit Paramour (Soundtrack). 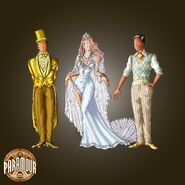 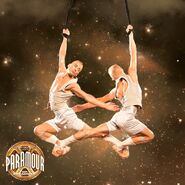 On Broadway Thru April 16 Only! Cirque du Soleil Paramour

Prepare To Be Swept Off Your Feet Cirque du Soleil Paramour

Behind The Scenes (Broadway)

Best of Both Worlds on Broadway Cirque du Soleil Paramour

Behind The Scenes (Germany)