O is a water-themed resident Cirque du Soleil production written and directed by Franco Dragone. It is the tenth Cirque du Soleil production since 1984 and second resident show in Las Vegas, NV after Mystere. O is inspired by the "infinity and the elegance of water's pure form" and pays homage to the magic of theater.[1] It's title being a phonetic word play on the French word "eau" meaning "water". O premiered on October 19, 1998 at The Bellagio Resort & Casino in Las Vegas, NV.

At the beginning of January 2020, O will be performing 7 days a week. To accommodate the new performance schedule, O has hired 85 additional cast and crew.[4][5]

The Stage and Theater[]

The stage floor is made from mondo with approximately 5,000 holes in each 4' x 8' panel for water to go through.[8] The stage is divided into four parts that move by scissor lifts. Each of the scissor lifts can ascend and descend to the bottom of the pool.[9]

The music of the show is can be heard underwater through 21 underwater speakers named "the Neptune System" so performers and crew can keep time with the show.[10] Two divers wear full face mask underwater to keep communication with the lighting booth at the top of the theater.[7]

There are 75 performers and 122 technicians in the show. During the performance, swimmers can spend up to 90 seconds under water and every swimmer has their own regulator. There are 15 safety divers underwater. All crew members and cast except the wardrobe department are certified scuba divers.[7]

The Carousel and the Rigging Equipment[]

55 ft. above the pool, O has a rigging conveyor system known as The Carousel. The Carousel weighs 18 tons and can spin up to 180 in. a minute and is designed to provide vertical, horizontal, and rotating movement over the pool. each of it's four winches that carries The Carousel can carry up to 1000 lbs of equipment at the speed of 240 in. per minute. The Carousel contains 41 scenery-related winches designed to move scenic and lighting elements.[8]

The Sound and Lighting Booth[]

The show has two automation consoles in the lighting booth. The the lighting cues, the rotating mechanical carousel, and the stage platforms are all controlled to precise procision in the control booth.[7]

Les Personnages du théâtre (Les Nus): Various characters that are "spirits" or memories of the O theater. These characters come from many different theater plays. These plays include: The Three-Penny Opera, Mother Courage, The Merchant of Venice, The Taming of the Shrew, La Grosse Femme, The Lady With a Dog, Cowboy, Six Characters in Search of an Author, The Bald Soprano, and many others.[13]

Costume designer Dominique Lemieux drew inspiration from 15th to 20th centuries while specifying in Venetian styles.[8] Full body measures are taken from each artists and specifically made to fit the body of the performer.[15] For headgear, wigs, and headpieces in O, each performer has a mold of their head for custom fitting. There are over 4,800 costume pieces used in O.[16]

The performers have 5 different looks they wear throughout the show. Each costume has a duplicate and can have up to 10 replicas.[16] L'Allumé (The Burning Man) is made from kevlar and weighs 41 lbs. It's lifespan last 7 to 9 weeks.[15] 60 loads of laundry are done per night.[16]

The music score for O was composed by Benoit Jutras. It is a mix of classical Western instruments and world instruments. These include the Chinese erhu, bagpipes, a tiple, African koras, and various English and French reeds.[8]

The live performance during the show is played by a 10 piece orchestra.[7] To minimize damage to the instruments, the musicians are enclosed in a glass enclosures on both sides of the theater.

For more information on the songs featured in O, please visit O (Soundtrack).

Flow (A Tribute to the Artists of "O") is a 2007 documentary film providing technical information on equipment used during the show.

A live performance of O was recorded for ARTE Concert for France and Germany. A livestream of the recording was shown on the ARTE Concert website.[17]

O has received the Entertainment Design Award for "best show production" in 1998.[18]

The documentary Flow won a Prix Italia for "creativity in high definition" in 2009.[20] 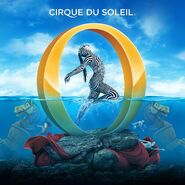 The Barrel Organ Grinder (The Strongman) 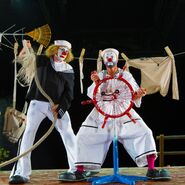 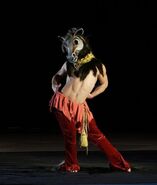 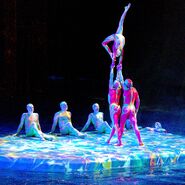 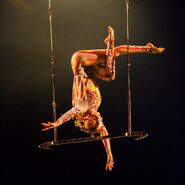 The High Dive Platform (60 Ft. Above the Stage)

Divers providing oxygen for the performers

The Show You CAN'T MISS While Visiting Las Vegas

Catch "O" behind the scenes!

"O" by Cirque du Soleil - Behind The Scenes

3 Synchronized Swimmers Get Trained for "O" by Cirque du Soleil