The following are performance milestones Mystère has achieved:

In 1990, Guy Laliberté pitched to the executives of Caesars Palace a resident show based around the themes of Greek and Roman mythology. According to Laliberté, the initial plans for the resident show were scrapped. "Mystère was developed for Caesar's Palace, but during a presentation to the board, they said it would be too risky and esoteric for a town like Las Vegas", Laliberté stated.[1]

According to Mystère set designer Michel Crête, "Las Vegas was still very influenced by Les Folies Bergère with the scarves, feather boas, etc. There was a European culture already in place, oddly enough, not an American one. The people who opened the door for something new were Siegfried and Roy. They were the first to move away from the Folies Bergère thing."[1]

Due to the previous partnership with The MGM Mirage with the resident touring show Nouvelle Expérience, Steve Wynn was interested in creating a permanent show at the upcoming new casino; the Treasure Island Hotel and Casino. In the beginning, the creative team was under tremendous pressure due to Mystère being the first permanent resident show and the MGM Mirage's investment into the project.[1] The themes of Greek and Roman mythology were expanded upon into themes of general mythology, the universe, and the origins of life.[1]

After seeing a preview of Mystère, Wynn was less than convinced about its prospects. "Steve Wynn said 'You guys have made a German opera here' ", Laliberté recalled," 'Franco answered. 'You just gave me the best compliment I've ever heard'."[1]

The Mystère theater was created by set designer Michel Crête and the Montreal-based Theater Design group Scéno Plus. The theater seats 1,541 audience members and measures 74,000 square feet.[2] The stage measures 121 feet wide by 70 feet deep. The floor of the stage is made from a layer of Base Mat which helps performers during tumbling. The Base Mat is held together by polyurethane adhesive and covered with thousands of gallons of liquid that dries onto the surface. The circus ring has a diameter of 36 feet and includes a 28-foot revolving stage. The revolving stage rotates up to 10 revolutions per minute. Behind the ring, there are three computer-controlled stage lifts with a capacity of 300 lbs. per square foot.[2]

There are 1,100 spotlights in the showroom with 731 lighting cues. The audio system contains 78 speakers controlled by custom-designed software by Level Control Systems. In the audio booth, a computer technician is able to draw on a computer screen the sound trajectory through the speakers.[2]

The inflatable snail called "Alice the Escargot" was created by Big Air Productions.[3] The snail is controlled by four puppeteers inside the snail to which they control her eyes, torso, and tail. The puppeteers move the snail around by following markings on the floor since there is no see through the mesh on the puppet.[4]

The taiko drums in Mystère are created by the Japanese company Asano Taiko, located in Mattō, Ishikawa Prefecture. The largest drum in Mystère is the ōdaiko, which is 6 feet (1.8 m) in diameter and 15 feet (4.6 m) in length, and weighs half a ton. Due to the large size of the drum, it had to be brought into the theatre during construction. Since the completion of the theater, the drum can not be removed, as no door is large enough to accommodate it.[5]

Costume designer Dominique Lemieux was inspired by nature to create the costumes of Mystère. The firebird costume has red feathers and accents to give the impression of embers flying through the air. The Spermatos and Spermatites costumes are elongated costumes which bulge in the center and have a tendril-like feature on the head. To give the characters an organic nature, spandex/lycra was used in conjunction with fringes and borders[6]

The music for Mystère was originally composed by René Dupéré who had previously worked on Cirque du Soleil's early productions. On November 8, 1994, a studio recording of the Mystère soundtrack was released containing music for the early acts of Mystère.

In 1995, Mystère went under an overhaul changing the acts, characters, and music. The renovation of the music was redone by Benoît Jutras. For the 25th anniversary of Mystère, another live album was produced for employees in a very limited quantity. 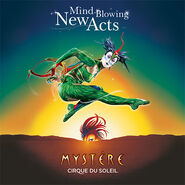 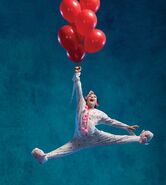 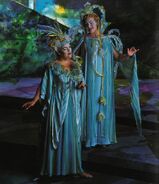 The Black Widow (The Black Virgin) 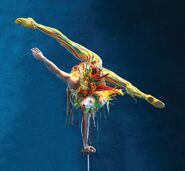 The Birds of Prey (The Pets)

The Double Faces (The Asicots) 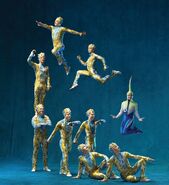 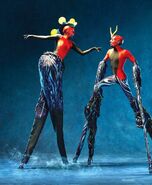 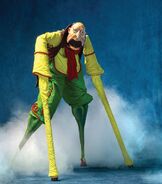 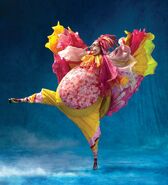 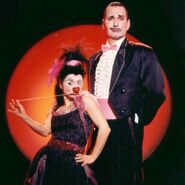 The Prince of Darkness 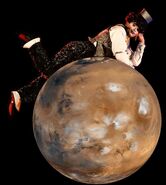 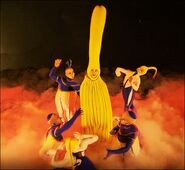 The Satyr ( The Green Man ) 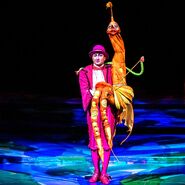 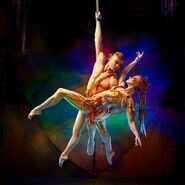 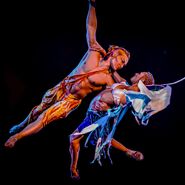 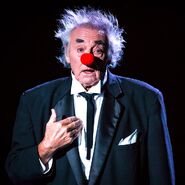 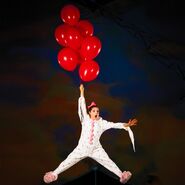 Behind the Scenes: Alice The Escargot

The Making of Duo Straps Mystère by Cirque du Soleil

Who is Ross Gibson? Behind the Scenes Cirque Stories Episode 3 Cirque du Soleil