Man in the Mirror Scene Creators

After the financial success of The Immortal World Tour, The Estate of Michael Jackson, Cirque du Soleil, and MGM Resorts collaborated together to create a permanent resident show at the Mandalay Bay Resort and Casino in Las Vegas, NV.[3]

Several of the creative team members who worked on The Immortal World Tour were hired back to begin work on One. These include writer and director of Immortal Jaime King, associate director Carla Kama, costume designer Zaldy Goco, music designer Kevin Antunes, and acrobatic performance director Germain Guillemot.[4]

Michael Jackson: One follows four "misfits" called The Heroes, Clumsy, Sneaky, Shy, and their leader Smarty Pants, who sneak into the theater to see the show. Upon entering, The Heroes discover 4 objects belonging to Michael Jackson: a black fedora, black shoes and socks, sequence white gloves, and sunglasses.

As they touch the objects, they are warped into the musical world of Michael Jackson and meet Mephisto, a representation of the paparazzi and tabloid media. They must find the objects again, overcome their own personal insecurities, and battle against Mephisto through the power of Michael Jackson's music.[4]

The Stage and Video Projections[]

When developing the stage for Michael Jackson: One, stage designer François Séguin was inspired by the cover art of Michael Jackson's Dangerous Album[4] which was originally painted by Mark Ryden.[5]

The proscenium arch of the theater is painted with rosettes and aligned with TV screens and statues in a Baroque-like architecture. The walls of the theater are plastered with tabloid articles permeates the set concept.[4]

The stage contains 66 winches with speeds of up to 12 ft. per second. Attached to the ceiling is two 96 ft. overhead tracks with two trolleys each to move performers.[4]

One uses 26 projectors, throughout the show to enhance the atmosphere and move the story of One. The stage is equipped with 1 LED track with 8 trolleys, each trolley supporting 8 LED panels. Using a GPS tracking system equipped with sensors, video content can be projected onto the artists as they move on stage. In addition to the projectors, One uses 11 TV monitors and a 40-ft-wide, 30-ft-high LED wall made up of 8 separate columns.[4]

The four large towers that are used as projection surfaces are able to move side to side and up and down. These towers are also used as dance surfaces for the performers.[4]

The sound system for One was custom built to immerse the audience in a concert-like experience. Sound designer Jonathan Deans divided the music of Michael Jackson into separate layers to be played throughout the theater. Each of the theater's 1804 seats contains 3 backseat speakers. This is a total of 5,412 seat speakers.[4]

Zaldy Goco, who previously worked on The Immortal World Tour, was inspired by the music and the spirit of Michael Jackson. Several costumes were inspired by outfits and costumes used in Michael Jackson music videos, concerts, and various appearances.[4]

Goco made approximately 1,150 costume pieces in the show.[4] He wanted the costume for One to have a manga-style look and feel to them. He used neoprene; a synthetic rubber used in sportswear, swimwear, and waterproof products; in most of the costumes to create stiff shapes in the costumes that would be flexible and stretchable for the artists.[4]

Several costumes use visual and illusions to emphasis the performance. The gangsters' costumes during the Smooth Criminal portion have white backside when the stage is lit. When stage lights are turned off and a black light is lit on the stage, ultraviolet drawings are revealed on the artists' costume and faces. The ultraviolet dragon tattoos were inspired by The Yakuza, a Japanese organized crime syndicate. The material used for the Smoothe Criminal gangsters is a high-end French fabric woven from plastic material to give the costumes a liquid shine.

Inflatables were used for the Tabloid Junkies costumes. During the performance, the artists activate a switch on their costumes causes a CO2 explosion. A dog-shaped head hood releases from the back of their costumes and instantly transforms the costume.[4]

The costumes used during I Can’t Stop Loving You and Billie Jean are equipped with hundreds of LED lights. This is to make the artists disappear in the dark while the costumes light up.[4]

The soundtrack for Michael Jackson: One was created by Kevin Antunes who previously worked on The Immortal World Tour. Antunes used the multi-track master recordings of the original Michael Jackson songs to create rearranged for One.[4] 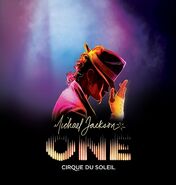 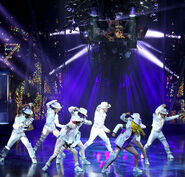 Michael Jackson ONE Celebrate the King of Pop with Cirque du Soleil New TRAILER Every Thursday!

Behind The Scenes at Michael Jackson ONE by Cirque du Soleil