Luzia's name is a fusion of the sounds of luz (light in Spanish) and lluvia (rain), two elements at the core of the show’s creation.[1]

The show had to stop its tour for 683 days during the Covid-19 outbreak. The Covid-19 lockdowns happened during the transit of Luzia from London, UK to Moscow, RU.

The set, costumes, performances and the music in Luzia are inspired by the culture, history, and mythology of Mexico. The stage contains two revolving rings and central platter. The central platter can be removed to reveal a water basin and is used during the aerial straps performance.

The element of water was brought into the overall set design - a first for a Cirque du Soleil touring show. 6,000 liters (1,585 gallons) of water used during each performance and are recycled for the entire duration of a stay in a given city. The water is filtered, disinfected and maintained at 28°C (82°F) for the well-being of the artists. All electronic and metal-based equipment near the water curtain are water protected to prevent electric shock.[2]

To produce the water curtain, A bridge suspended 14 meters (46 feet) above the stage supports a water reserve and the set of 174 nozzles used for the curtain. The structure can rotate 360 degrees. The nozzles of the curtain can be individually controlled to create various images using water droplets and blank spaces. The water in the basin is channeled to an external 2,500-litre (660-gallon) tank where it is treated and pumped up to the bridge 17 meters (56 feet) above the stage. The stage floor has 94,657 holes through which the water drains into a 3,500-litre basin underneath the stage.[2]

During the rainfall sequence, images are made in the rainfall to reflect the mood and story of the show. These images are generated electronically by a graphical water display screen. Some of the patterns are Otomi, flowers, raindrops, and various animal figures displayed in the rainfall.

The Giant Disk and The Blue Box[]

Luzia also has a giant disk for its centerpiece background. It is a symbol of the sun, the moon, and the Aztec Calendar. The disk is 6.9 m in diameter and weighs about 2,000 kg. It is supported by a giant bracket, called the “Cobra”, which functions like a crane. The disk can move over a distance of 5.5 m and can rotate horizontally 360 degrees in both directions. The disk also contains a giant lightbox.[2]

With the different settings, props, and elements used in Luzia, set designer Eugenio Caballero decided to create the stage as a black box theater, a simple empty performance space, dubbed "the Blue Box", so stage elements, props, and elements can be put on stage without it conflicting with the set design. Blue backdrop was used to enhance the various elements that appear on stage.[2]

Cempashchil and The Papel Picado Curtain[]

At the beginning of Luzia, the stage is covered with over 5000 cempasuchil and two treadmills. Also known as the Mexican Marigold and the Aztec Marigold, the cemparuchil is used during The Day of the Dead to be placed on alters.[3] It has also been used for medicine, culinary dyes, and essential oils.[4][5] Two treadmills used for the Running Woman sequence and Hoop Diving weigh 3,630 kg apiece and are powered independently by 28 automobile-type batteries.[2]

At the end of the first act, a Papel Picado curtain as a stage piece to signify the end of the act. The Papel Picado curtain is 11 m high by 30 m wide and 13,000 holes into the surface of the curtain to create the images. The curtain was created by Javier Martínez Pedro and all the images on the curtain were hand-drawn. The curtain's images contain various narrative elements from Luzia such as a horse, a field of flowers, a flock of hummingbirds, a plaza, a cenote, a cave, an underwater world, raindrops, a storm, the sun, a city, and desert cacti.[2]

For the costumes of Luzia, costume designer Giovanna Buzzi collaborated with the showrunners of Luzia to discuss costume designs. They wanted to avoid the folkloric aspects of Mexico and Mexican culture and potential clichés when it comes to the color palette of Luzia. Each scene of Luzia has it's own distinct color palette.[2]

Animals are used in the design of the costumes. There are many different types of animal head wears (crocodile, cockroach, grasshopper, armadillo, snake, swordfish, and tuna) and a iguana shall. Some of the parts of the animal props can be used as a puppet. The puppeteers of Luzia wear Guayabera shirts instead of traditional black bodysuits. The Guayabera shirt is a traditional Mexican wedding suit.[2]

For the luchador costume, there are 160 heart-shaped vinyl pieces sewn onto the costume. For the male swimmer costumes during the hand-balancing act, nearly 850 small mirrors are sewn into the costumes. There are 300 mirrors on the female swimmers' costumes.[2]

The music used in the Luzia show was composed by Simon Carpentier. A soundtrack inspired by the songs used in Luzia was composed by Bostich and Fussible (Ramón Amezcua and Pepe Mogt) of Nortec Collective. In a Billboard interview, Alain Vinet, Cirque du Soleil's music director, explained about the partnership, "Normally, the albums come out six months down the road, or a year down the road [after the show opens], because when we are in creation, the musicians are really, really busy; it’s impossible for us to take them out of the creation. But the mandate was for us to have the CD for the opening of the show. The only way we could achieve this was to outsource the production of the CD, and that is why we went with Nortec. They have a key component -- excellent Mexican musicians. They know everyone in Mexico as far as musicians are concerned."[7]

For more information on the songs featured in Luzia and the soundtrack, please visit Luzia (Soundtrack).

A live performance of Luzia was recorded in Montreal, Canada in 2016. It was released on DVD on November 17, 2016.

A Tapis Rouge Experience for Luzia was introduced during the San Francisco premiere.[10] 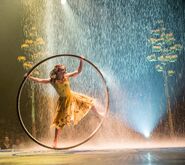 Story of an Encounter Series

What It Takes To Be A Contortionist For Cirque Du Soleil