The idea for a Beatles-themed Cirque du Soleil show arose from a conversation between George Harrison and co-founder of Cirque du Soleil Guy Laliberté at George's Friar Park Estate.[1][2] After three years of negotiations between surviving members Paul McCarthy and Ringo Starr, widows Olivia Harrison (wife of George Harrison) and Yoko Ono Lennon (wife of John Lennon), Apple Corps Ltd., and The MGM Mirage, the concept for a Beatles-themed show came into an agreement.[3]

In 2011 for the fifth anniversary of Love, Cirque du Soleil started to offer guided backstage tours. This experience allowed visitors to see the backstage, training rooms, costume workshop, break area, and a chance to go up on the catwalk into the sound and lighting booths.[4]

In February 2016, the producers of the show did a "refresh" of Love with an update to the production. Several changes include adding new imagery to the projections, the lighting of the show, acts, costumes, and adding and removing pieces of music.[5]

Also in 2016, Cirque du Soleil started to offer a 30 minute "behind the scenes" presentation called "The Magical Technical Tour". This presentation tells the audience about the technical elements of the show such as the automation, audio, projections, lighting, rigging, and some of the show’s props and wardrobe.[6][7]

The Love Theater is a 360 degree "theater-in-the-round" stage where the audience surrounds the performance area. There are more than 6400 speakers in the theater with 2013 seats. Each seat is fitted with three speakers including a pair in the head rest. There are 52 projectors in the theater covering the stage and the 4 scrim curtains.[8]

The stage has 9 stage lifts that can be raised and lowered. The largest lift can hold up to 22,000 pounds. When installing this lift, engineers had to dig 32 feet into the ground to have it installed. It provides of 150 pounds per square foot and has a speed of a foot per second.

The Love theater also utilizes it's ventilation system by adding scents to specific segments and controlling the density and temperature. During the "Here Comes the Sun" performance, the theater is filled with a scent of flowers and incense.

During the "Strawberry Fields" performance, bubbles are blown from a fiberglass piano filled with soap solution. The ventilation system is used to controls the air flow and density in the theater to make the performance happen. This was done due to the engineers realizing that the dry air outside the building was causing problems for the segment[4]

The Love theater replaced the previous stage for Siegfried and Roy and is said the total replacement cost more than $100 million.[2]

The costumes for Love reflect the different fashion styles throughout The Beatles musical career. The costume designer for Love Philippe Guilottel combined traditional and Victorian fashions with bright and colorful imaginative designs.

Love is a celebration of the musical legacy of The Beatles. Love explores the history of the Beatles through a interpretive acrobatic stage performance.

The soundtrack for Love was created by Abby Road Studio's George Martin and Giles Martin. Unlike previous Cirque du Soleil productions which have live performed music, the music for Love uses prerecorded materials from The Beatles Catalog. Giles Martin suggested using mash-up techniques to create a unique soundscape for the show.[11]

Before the visualization of the show with the broad story-line, the music was developed first to make the basis for the show Love.[12] The first track to be developed for the show was "Within You, Without You / Tomorrow Never Knows".[11] It was apart of a 15 minute demo developed by Giles and George Martin before being approved by Paul McCartney, Ringo Starr, Yoko Ono Lennon, Maria Harrison, and show creator Dominic Champagne.[2]

120 Beatles songs were used to create 27 songs for the soundtrack for Love.[13]

During the 2016 update of Love, Giles Martin was brought back to recreated, remixed, and cleaned up the audio for the show. Early Beatles songs were added to the show with "Twist and Shout" replacing "I Am the Walrus".[14]

For more information on the songs featured in Love, please visit Love (Soundtrack).

Love is also featured in the Cirque du Soleil film Cirque du Soleil: Worlds Away. The segments of Get Back, Glass Onion, Being for the Benefit of Mr. Kite, Octopus' Garden, Within You, Without You, Lucy In The Sky With Diamonds, and While My Guitar Gently Weeps were used in the film.

During the early pitches for the show, a concept for a show based on the 1968 Beatles movie The Beatles: Yellow Submarine was pitched. It was to be staged at The Roundhouse in London, UK.[11]

If a less serious problem arises during the production of Love, the classic Beatles line "Number 9" from the song "Revolution 9" on The White Album is repeated while the problem is being fixed and the performance is still running.[4]

The Fool on the Hill

The Boys From Liverpool 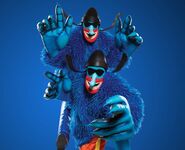 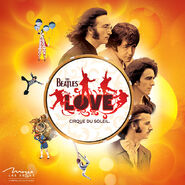 The Beatles LOVE Beginning of Evolution

The Beatles LOVE Evolution of Sound

The Beatles LOVE Evolution of Props