Bazzar is a Cirque du Soleil touring production created and directed by Susan Gaudreau. It is the 43rd original production since 1984.[1] The name Bazzar was inspired by the interactions, the different mix of colors, and sights and sounds that would be found in a bazaar.

Bazzar pays homage to the early years of Cirque du Soleil by having a smaller interactive intimate stage, fire breathing, and stilt walking.

It is the first Cirque du Soleil show to perform in India.[1]

Bazzar's set design is a geometric design and has more interactive elements with the performers. The Grand Chapiteau is a smaller than the usual Cirque du Soleil tent. Not only is to make it easier for set up and to travel and perform in smaller cities, but it is a homage to the earlier tents used by Cirque du Soleil.

James Lavoie, the costume designer for Bazzar, was inspired by early history of Cirque du Soleil as street performers. James was also heavily influenced by the stage's geometric design itself.[2]

The themes of assemble and disassemble are found through the costumes of Bazzar. Digital printing, silk screening with various foils and silicones were used to create garments.

The music to Bazzar was composed by Simon Carpentier who previously worked on the Cirque du Soleil shows Zumanity, Banana Spheel. Wintuk, and Luzia. He was inspired by street percussions found through street performances and folk music.

For the live performances, there are always two live musicians on stage while the rest of the music is prerecorded.[2]

Bazzar premiered in Mumbai, India on November 14, 2018. Premiering and performing in India is a company first. 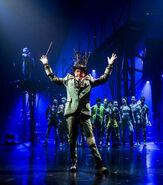 What is Mallakhamb in Cirque du Soleil BAZZAR? 1st Time Ever! Meet our Performers from India

BAZZAR Artists Get Ready for India Premiere! What are they looking forward to? Cirque du Soleil

Would YOU Watch This Show?